Corvallis, Ore.-- More than a month before a game-changing detection of a short gamma-ray burst – a finding announced today – scientists at Oregon State University predicted such a discovery would occur.

Scientists from U.S. and European collaborations converged on the National Press Club in Washington, D.C., today to say they’ve detected an X-ray/gamma-ray flash that coincided with a burst of gravitational waves, followed by visible light from a new cosmic explosion called a kilonova. 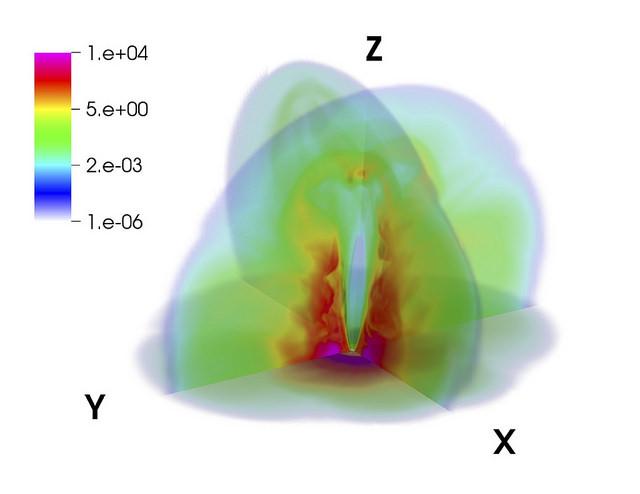 A powerful jet of high-speed material is shown in blue at the center of this three-dimensional computer simulation of the instants following the collapse of a binary neutron star system that formed a black hole. While the jet produces very bright radiation, only an observer at the top of the figure would see it since it is directed along the jet itself, like the beam of a lighthouse or a laser pointer. The work of OSU theoretical astrophysicist Davide Lazzati and collaborators concerns the halo of material (in green in the figure) that expands sideways and gives rise to a dimmer yet discernible flash of X-rays. It is believed that it is this secondary emission, visible from any direction, that was detected simultaneously to the gravitational waves pulse and that allowed for the localization of the source and its follow-up from dozens of telescopes and satellites around the world.

Gravitational waves were first detected in September 2015, and that too was a red-letter event in physics and astronomy; it confirmed one of the main predictions of Albert Einstein’s 1915 general theory of relativity and earned a Nobel prize for the scientists who discovered them.

“A simultaneous detection of gamma rays and gravitational waves from the same place in the sky is a major milestone in our understanding of the universe,” said Davide Lazzati, a theoretical astrophysicist in the Department of Physics. “The gamma rays allow for a precise localization of where the gravitational waves are coming from, and the combined information from gravitational and electromagnetic radiation allows scientists to probe the binary neutron star system that’s responsible in unprecedented ways. We can tell things like which galaxy the waves come from, if there are other stars nearby, and whether or not the waves are followed by visible radiation after a few hours or days.”

On July 6, Lazzati’s team of theorists had published a paper predicting that, contrary to earlier estimates by the astrophysics community, short gamma-ray bursts associated with the gravitational emission of binary neutron star coalescence could be detected – whether or not the gamma-ray burst was pointing at Earth.

The paper appeared in the journal Monthly Notices of the Royal Astronomical Society.

Collaborators from the Laser Interferometer Gravitational-Wave Observatory, known as LIGO, and the European Gravitational Observatory’s Virgo team on Aug. 17, 2017, detected gravitational waves – ripples in the fabric of space-time – produced by the coalescence of two neutron stars.

“The Fermi transient is more than 1,000 times weaker than a ‘normal’ short gamma-ray burst and has the characteristics that we predicted,” Lazzati said. “No other prediction of such flashes had been made. Just by pen and paper almost, we could say hey, we might see the bursts, even if they’re not in a configuration that makes them obvious.”