CUWiPs are three-day regional conferences that offer undergraduate women in physics a unique opportunity to explore careers in science through panel discussions and workshops by women physicists, discussions about women and underrepresented minorities in physics, touring labs, participating in a student poster session, networking with peers and with professional women physicists as well as gaining valuable graduate school and job seeking advice.

“The CUWiP conference gave me the confidence I needed to realize that I could be successful as a physicist. Now I’m looking forward to offering that experience to others,” said Gicking.

A renowned materials physicist who has spent more than 25 years at Oregon State, Janet Tate’s mentorship is extensive. She served as the Chair of the American Physical Society’s Committee on Careers and Professional Development and is passionate about encouraging diversity in science. She has also received numerous honors, including the College of Science’s Gilfillan Award for scholarship in science, a Sloan Research Fellowship and a Frederick H. Horne Award for excellence in teaching.

“CUWiPs help support women undergraduates in physics by letting them hear stories from women who are successfully pursuing many different careers in science,” said Tate.

“They give students a new perspective on their current studies and future careers. I’m excited to be part of this effort," adds Tate.

Building diverse leaders in science is fundamental to the College of Science. Dean Sastry G. Pantula is an ardent supporter of women in STEM. In the past, he's presented a video address a Women in Statistics conference and spoke at an Association for Women in Mathematics conference and Infinite Possibilities Conference, a conference designed to promote, educate, encourage and support minority women in mathematical and statistical sciences.

“Science faculty and alumni are committed to supporting and promoting women in science. I am thrilled to welcome CUWiP to campus, which has done so much in the last decade to mentor, empower and increase participation of women in science,” said Pantula. “It is truly a pleasure to celebrate the successes of women in physics as well as across all sciences.”

The event kicked off Friday, January 15, with a dinner and networking event, “World of Physics,” in the LaSells Stewart Center’s Giustina Gallery. The conference included a weekend of workshops, educational sessions, networking opportunities, tours of campus labs and a student poster session. The full conference agenda is available online.

On Saturday, Mary James, Dean for Institutional Diversity and the A. A. Knowlton Professor of Physics at Reed College, presented a talk, “What Does Access Really Mean?.” Other events included a panel discussion on “Careers in Industry with a Physics degree” moderated by Crystal Bailey, Careers Program Manager at the American Physical Society, a facilitated lunch discussion about being a woman in science, and “Exploring the largest and smallest scales of the universe: A day in the life of a National Lab” by Natalie Roe, Director of the Physics Division of the Lawrence Berkeley Laboratory.

Keynote speaker Ginger Kerrick of the NASA Johnson Space Center gave a special live telecast to conference attendees at all nine CUWiP locations. At the age of 13, Kerrick wrote a letter to NASA saying she was interested in science and wanted to work for them. Today, the El Paso native is the Flight Director and Assistant to the Chief for International Space Station. Kerrick addressed attendees at all CUWiP conferences nationwide and offered participants the chance to ask questions. Her pre-conference video can be viewed online. 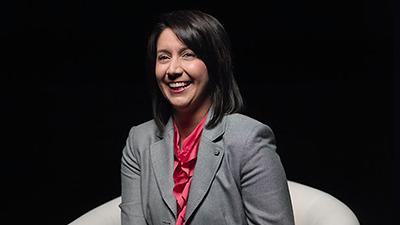 Keynote speaker Ginger Kerrick from the NASA Johnson Space Center where she is the Flight Director and Assistant to the Chief for International Space Station will host a live webcast to speak to conference attendees at all seven locations.

On Sunday, Laura King presented, “One person’s journey through Industrial Physics.” King is passionate about leadership, partnership and people management and has built successful partnerships, effective teams and diverse staffs. She completed her post-doc work at OSU in solid state chemistry.

The conference concluded with a lunch-time awards ceremony.

Founded in 2006, CUWiP attendance has grown steadily each year and the eight or so different conference locations across the United States now attract more than 1,000 women scientists. In 2012, the American Physical Society (APS) became the institutional home for CUWiP.

CUWiP was made possible through federal grants from the National Science Foundation and the Department of Energy Office of Science, and generous local sponsors, including ONAMI; HP; Vernier; OSU’s Research Office, Division of Student Affairs, Division of Undergraduate Studies as well as OSU’s Department of Physics and College of Science through philanthropic support.